Have you figured out your plot? Eh, don’t worry, neither have I.

Besides, as they say, “no plot, no problem.” Right? NaNo is the time to write with “literary abandon,” forget the rules, and just write.

Personally, I can’t do that. I can not handle not knowing what I’m going to write, and even though I’ve been successfully NaNo’ing since 2007, I have yet to learn how to let loose and “just write.”

And if try to do so without any mental preparation and just one idea to cling to, the struggle gets very real.

But I’ve got a trick. (It’s likely review for many of you, so feel free to chime in and expand on this awfully simplistic overview.)

The trick is simple. Put all your thoughts and ideas about your novel aside. Write them down if you must, and then get them out of your head.

And then, focus on three things:

Figuring out your protagonist’s GMC is like having a key that unlocks your story. Because your protagonist is working towards something, you’ll find that she isn’t wandering around aimlessly and spending a lot of time in deep thought.

Because of her goal, your story will propel itself forward.

Which means you’ll reduce the amount of time spent in front of your computer spinning your wheels and suffering.

Let’s discuss. (We’ll use Wonder Woman / Diana as an example because it’s a movie familiar to many and her GMC is crystal clear.)

Diana’s goal is to leave Themyscira, go out into the world, and kill Ares, the God of War.

Diana wants to put an end to the suffering war brings, which makes sense because her culture and upbringing have taught her to value peace.

Not to mention that she believes her island is in danger and she wants to protect her home and the people she loves.

Why can’t your character have what she wants?

At first, Diana’s mother is against the idea of her daughter fighting Ares. Then she has to deal with Steve, her antagonist, who has a conflicting goal. And then she has to pass through a war zone to get to Ares.

And poof! Right there, Diana’s GMC has given us a basic but pretty solid story.

A Bit of Vocabulary

It’s much easier to figure out your character’s GMC if you truly understand the following terms and how they relate to each other:

Protagonist: A character who has a goal and wants something (a McGuffin).

Antagonist: A character who wants to stop your protagonist from reaching his or her goal thus creating conflict, but isn’t necessarily a “bad guy.” (A grown-up who stops a toddler from running into the street after a ball isn’t being mean or bad, but is preventing the toddler from reaching the ball. Diana’s mother and Steve are antagonists, but aren’t necessarily bad.)

Villain: Well, you know… But just to clarify. . . please note that your antagonist and villain can be the same character. But if they’re not, like in the case of Wonder Woman, don’t forget that your antagonist is really the one who has the biggest impact when it comes to moving your story forward.

If you want to get really creative, your protagonist can be your villain, like Dr. Horrible.

McGuffin: What your protagonist wants (her goal). It can be a bag of pretzels or it can be world peace. It doesn’t matter, as long as she truly wants something, and for a good reason (motivation).

Here’s a chart I give my elementary school students. No, you don’t have to color (though it would probably thrill your muses). I hope it’ll help you over the next week and through November and beyond. 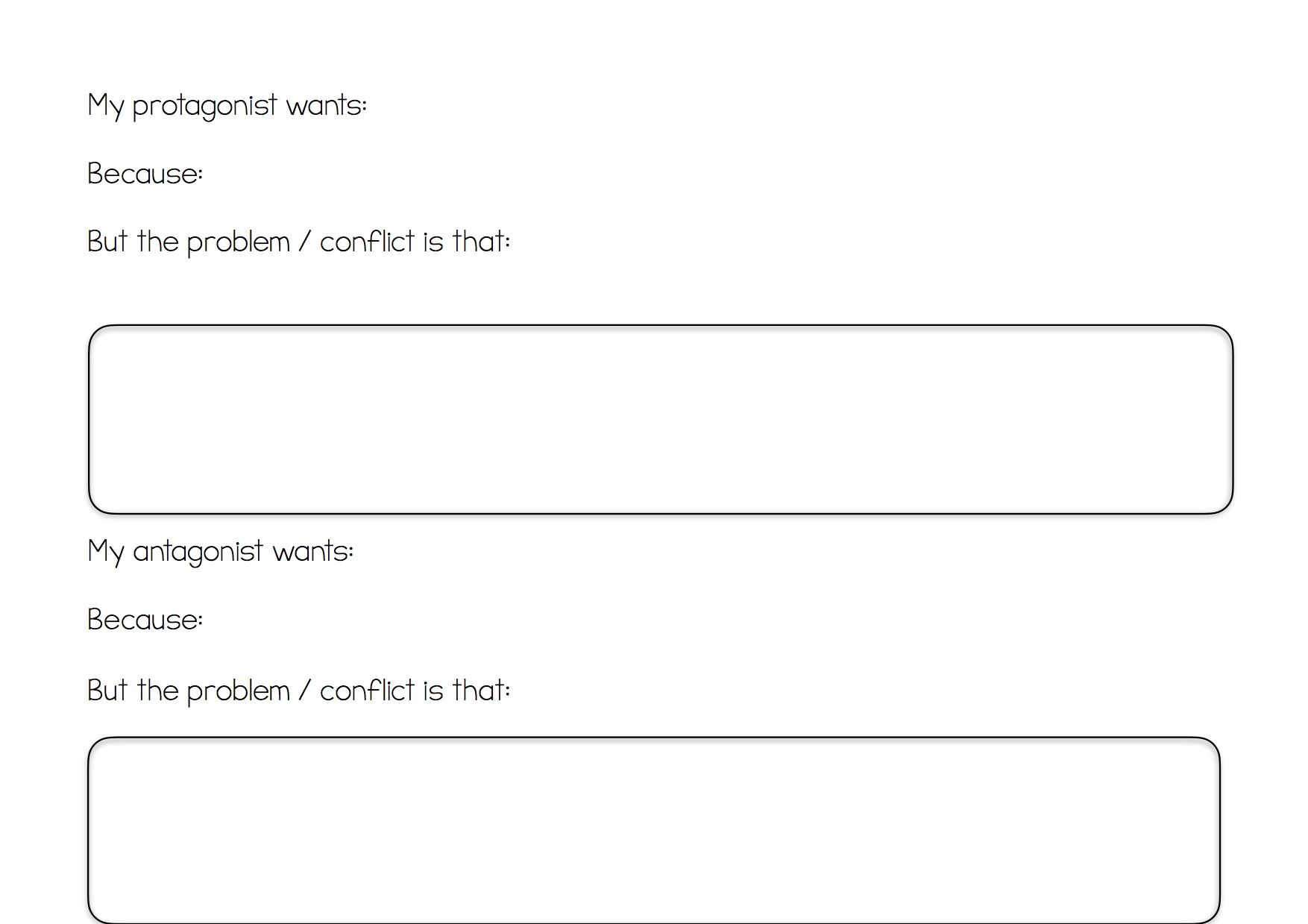 If you start your noveling process by figuring out GMC, the details and specifics of your story will work themselves out along the way. I promise.

For more info on GMC, listen to this fantastic episode of How Story Works.

Melina writes contemporary romance with a pinch of oregano and a dash of chutzpah. She loves to travel, especially to her family’s village in Crete, and turn her adventures into research for her novels.

In July of 2012, she moved from New York to Jerusalem with her adorable but sneaky cocker spaniel. Her family now includes an incredibly sweet yet troubled rescue puppy.

She has been freakishly dedicated to and enthusiastic about NaNoWriMo for over ten years, and enjoys acting as a Co Municipal Liaison for Jerusalem.

You can visit her at http://melinakantor.com.